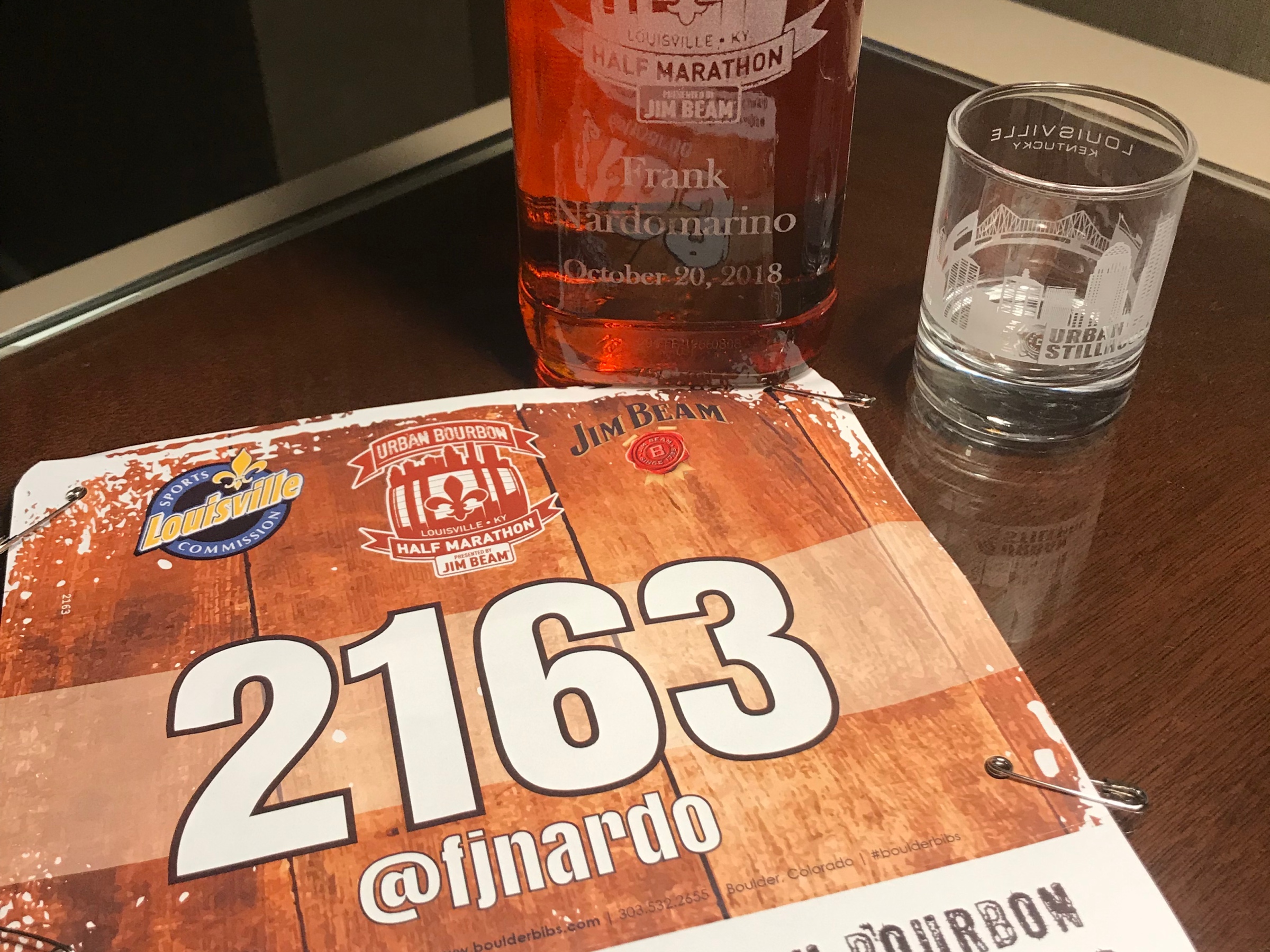 “Disclaimer: I received a free entry to the Urban Bourbon Half Marathon race as part of being a BibRave Pro. Learn more about becoming a BibRave Pro (ambassador), and check out BibRave.com to review, find, and write race reviews!”

Where do I even begin?  This race has been on my radar for quite some time.  Many of the BibRave Pros have run this in the past and I finally made it a goal to run it in 2018.  It has easily become my favorite race for so many reasons.  Right when I registered, I quickly made hotel reservations right next to the party!  I was registered way in advance so eager anticipation built up.  Everything about this race from initial registration to the post race party was as good as it gets.  I already know I’ll be running this next year!

Registration – Easy as it gets.  It’s clear on the website stating that since it’s a bourbon themed race that you have to be 21 years old to register.  There were options to not only register as an individual but also teams.  Price increases were well advertised.

Race Communication – We received plenty of emails leading up to the race letting us know about everything race related like course changes, special events, bourbon tastings, post race party details, etc.  The last couple of weeks before the race, the emails were all about last minute details.  It included parking information, Bib numbers, and packet pickup details. 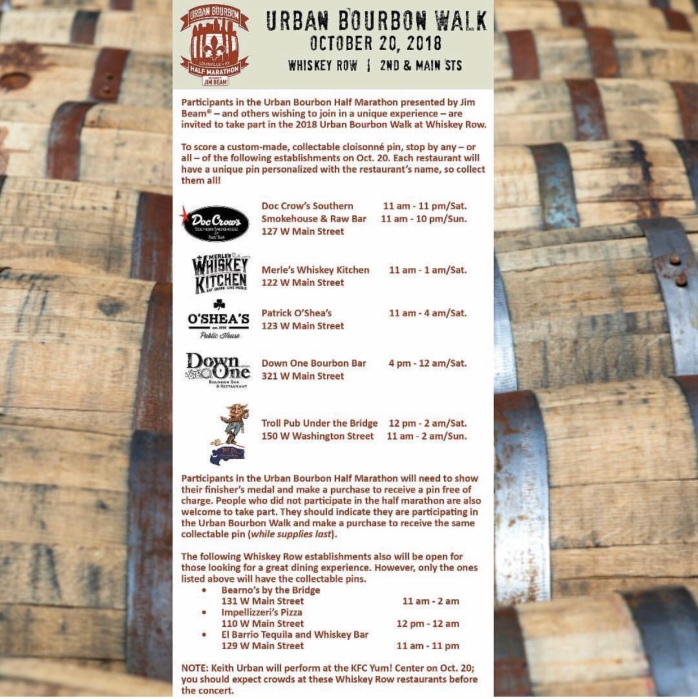 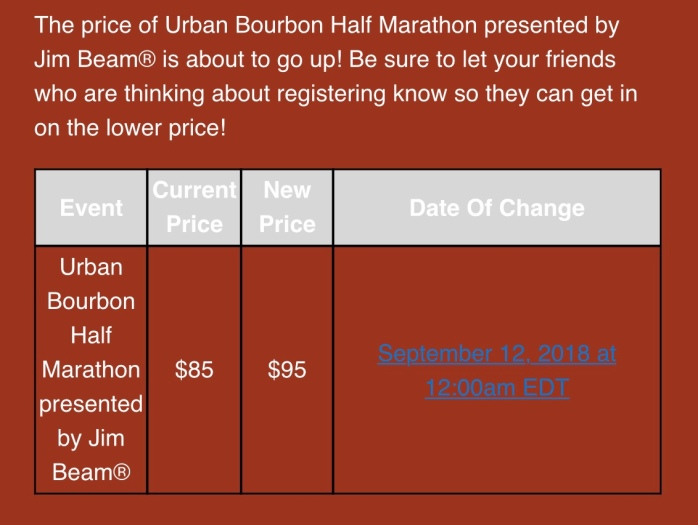 Packet Pickup – There were two options for packet pickup with a VIP option or standard pickup at the PNC Club at Cardinal Stadium.  Parking was free at the stadium.  There was also some bourbon tasting at the expo and the standard souvenirs, race shirt exchange, and supplies.  The VIP experience which I was privileged to be part of was at the Jim Beam Urban Stillhouse and was such an incredible opportunity.  I met up with fellow BibRave Pros Emily and Jonathan Friday night.  We were given free drinks, hors d’oeuvres, some live bluegrass music by the Tavern Travelers, and a complimentary token to participate in the Taste of History experience at the Jim Beam Urban Stillhouse that includes a small working distillery, a bottling line, and a tasting experience!   We were taught all about how to properly drink bourbon and sampled some great drinks.  At the end, you also had the opportunity to purchase a Jim Beam White Label commemorative bottle that was laser engraved with your choice of design.

The Swag – The long sleeve gender specific tech shirt is freaking great!  The fit is right on and I’ll be sporting it on these recovery days!

The Race – I always love a high energy pre race and the Urban Bourbon didn’t disappoint.  The weather was tad chilly at the beginning but for a Midwesterner, it was perfect for a half marathon!  I met up with my fellow BibRave pros right next to the start line for a quick picture opportunity.  There were no corrals but there were some great pacers with very visible signs that you could guide your way in to run with them.  We were led off by the Kentucky Derbys official butler Steve Buttleman who had a chilling rendition of the Star Spangled Banner!  Absolutely incredible.  As for the course itself, there were some beautiful areas we ran through with on course entertainment in certain areas.  Going through the Cherokee Park was so scenic but those hills were a true test!!  There was plenty of on course spots for family and friends to encourage the runners and hold those friendly motivational signs. 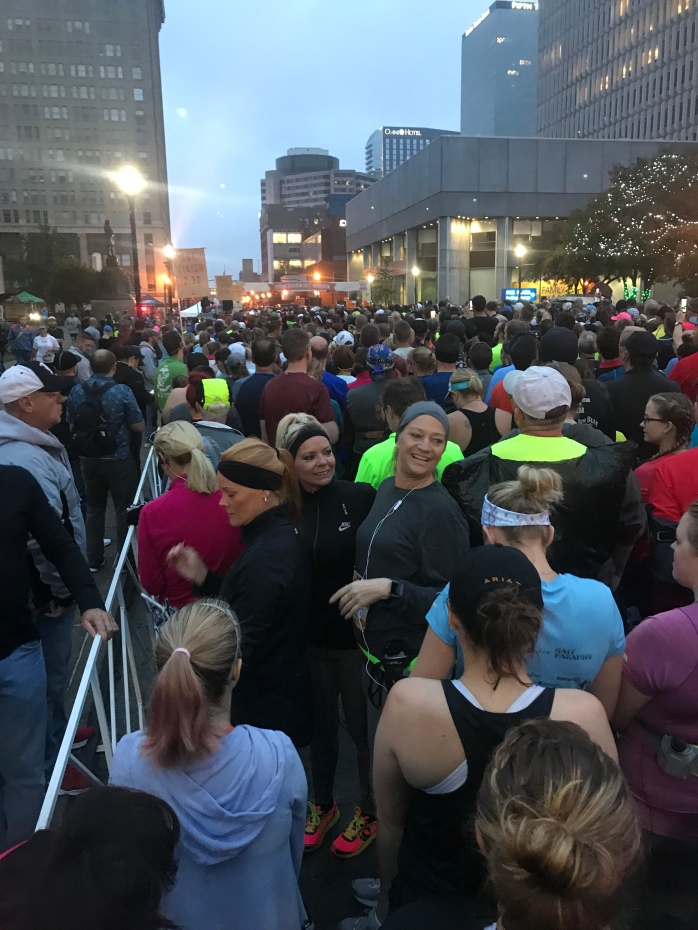 The Post Race Party – Hello??!!  Bourbon Bash!!  By far, the BEST post race party I’ve ever seen.  Let’s see, live music by the Louisville Crashers, free Falls City beer, a slice of pizza, bourbon samples, and burgoo.  This was all held at Fourth Street Live.  The ID bracelet we wore had tabs for each of these items and the general public was able to sample as well for a small fee.  There was even a spot for table massages should you need a quick fix after the race.  It was packed full of people and energy and so much fun!  Other races could definitely take note on how to post race party!!  Also had the opportunity to see the Race Director Michael who did such an amazing job with this whole race. 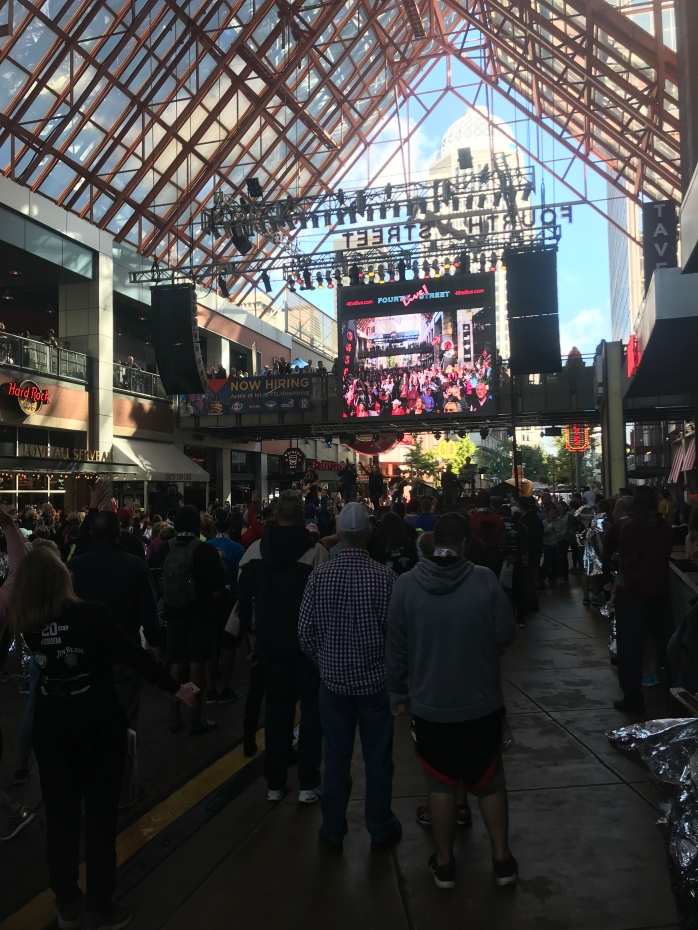 The Medal – Um yeah, this speaks for itself.  I’ve seen many of the medals from years past and when I saw this one come out, I could not wait to get mine! 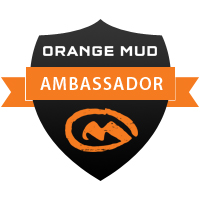